Excerpt
​
​​"Sweat, Senators, and Soviets"
​
"I usually went in around 7:30 a.m. on Saturday mornings after having breakfast at a popular diner on Pennsylvania Avenue that was almost always packed with interesting characters from all walks of life. Among them was an otherwise normal-looking guy in a jacket and tie who would take off his black wing-tip shoes and put them on the counter for what he said was “safe keeping.” Along with good, cheap food, the diner had incredibly robust, flavorful coffee. That made me curious, and I asked the guy behind the counter why the coffee was so good. He had a bald head festooned with the tattoo of a hula dancer whose hips swayed a little when he scrunched up his forehead.

​One Saturday, I was working away at a typewriter when a high-ranking executive stuck his head in the door and asked me to come to his office right away. On the mistaken assumption that I was competent, he handed me a sheet of paper and told me to send it by something that sounded like “desk” to White House Press Secretary Ron Zeigler who was in San Clemente, California. Roughly halfway between Los Angeles and San Diego, San Clemente was the location of President Nixon’s home, La Casa Pacifica, which was often referred to as the Western White House.

Don Stinson (2022)
​As the high-ranking executive loaded papers into his briefcase and grabbed his suit jacket, he told me to call the White House operator “later” to reach Zeigler and let him know that the document was coming. With that, he headed out the door at warp speed and left me confused, anxious, and sick to my stomach with worry about what I was supposed to do.

Trying to sort it all out, my first concern was with the word “later.” Did he mean that I should call the White House operator in ten minutes or at 6:00 p.m.? Was I supposed to talk to Zeigler and just say that something was on the way or say “Good morning” too? I had no clue. My concern quickly turned into panic as I realized that I didn’t know what he meant by a “desk” either. To soothe my nerves, I immediately went to the cafeteria to get a glazed doughnut and a cup of coffee and, after loading up with more than enough sugar and caffeine to launch myself into lunar orbit, started walking up and down the halls frantically in search of someone who might know something. 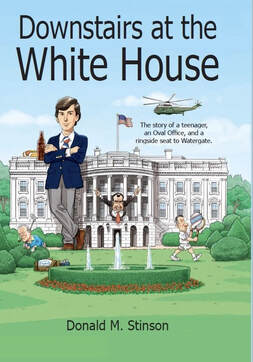 One lesson I learned that day was the importance of properly phrasing a question, particularly when you need help. Instead of saying, “Excuse me. I’ve been asked to send a document to the Western White House. Can you help me?” in a calm, measured voice, I walked up to people and spewed out a string of vaguely connected words that were met with cold stares and unenthusiastic good luck wishes.​

​Eventually, I came across an EPS officer who at least minimally understood what I was saying and directed me to the White House Communications Agency, the group that handled Presidential communications. Rather than joining in my panic, the guy I spoke with at WHCA looked excruciatingly bored, asked me if I meant LDX, short for Long Distance Xerography. That sounded like a winner to me. I nodded my head “yes” and he pointed me to a machine. After realizing that I had no idea how to work the LDX, a frequently used term for a fax machine, the WHCA guy told me that he’d send the document.

​Feeling confident for all the wrong reasons, I dialed the White House operator at about 8:30 a.m., explained that I had orders to call San Clemente, and asked to be connected to Mr. Zeigler. Completely oblivious to the fact that it was only 5:30 a.m. in California, I obviously wasn’t expecting a very groggy man to answer the phone. “Yes?” he asked in the kind of husky voice that usually means that the victim of your call was in a very deep sleep. The White House operator said something I couldn’t make out because my heart was thumping in my ears.

Paralyzed over not knowing what to say, I blurted out “It’s me.”

​“That’s right,” I said and quickly hung up."
​
Copyright 2017 by Eastern Harbor Press. All Rights Reserved.